The beautiful Uyuni Salt Flat (or Salar de Uyuni) is with its 10.582 square km (4.085 square miles), the world’s largest salt flat. It is located in the Department of Potosi in southwest Bolivia, near the crest of the Andes, at 3.650 meters above sea level. Some 40.000 years ago, the area was part of Lake Minchin, a giant prehistoric lake. When the lake dried, it left behind two modern lakes, Poopó and Uru Uru, and two major salt deserts, Salar de Coipasa and the larger Salar de Uyuni. The Uyuni Salt Flat are roughly 25 times the size of Bonneville Salt Flat in the United States and is estimated to contain 10 billion tons of salt of which less than 25.000 tons is extracted annually.

Every November, the Uyuni salt flats is also the breeding grounds for three species of South American flamingos – Chilean, James’s and Andean. La Isla del Pescado (Fish Island) located on the salt flat and full of giant cactuses is named this way as the ´island´ has the shape of a fish. It is the only sign of life for miles. Green Lagoon, Red Lagoon and the Polques Hot Springs can also be visited during the Uyuni Salt Flats tour when entering the National Reserve Eduardo Avaroa.

Laguna Verde (Green Lagoon) is a beautiful green colored salt lake close to the Chilean border at the foot of the Licancabur volcano. Its color is caused by sediments, containing copper minerals. It is located approx. 4.300 meters (14.000 ft) above sea level. Red Lagoon is a red colored salt lake, also because of the presence of minerals. In these lagoons live flamingo’s creating a very unique scene of spectacular beauty! 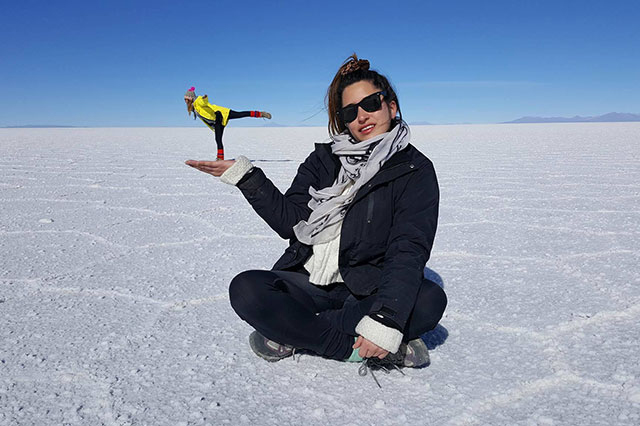